The Human Element in AI Recruiting: Why AI Doesn’t Eliminate Bias by Itself

If you haven’t heard already, AI can have a bias — if you make it biased. What we mean by this is AI algorithms are supposed to be unbiased. but if they’re created by people with unconscious biases they have the potential to adopt them into their programming (even if it wasn’t intentional).

As AI, machine learning and predictive analytics infiltrate every aspect of the recruiting scene, organizations and recruiting teams have to be aware of what they’re putting in their algorithms. Automation is the key to a lot of recruitment and sourcing success. But, what happens when leaders of the organization don’t pay attention to what’s going into their programs? How can we apply better algorithms to take advantage of the technology so readily available without adding bias?

NEWS FLASH! #recruiting tools can be biased! Curious what I’m talking about? Check out @IQTalent’s article about what these tools are and how to combat bias.Click to Tweet

Before we get into what recruitment bias in AI looks like and how it can be prevented, let’s set the record straight on the different branches of AI technology and how they’re used in recruiting. AI, predictive analytics and machine learning often get used interchangeably across the recruiting community. Just as the definitions are different, we should be using these tools in different ways when recruiting.

Digitalist Magazine says machine learning, in short, uses AI applications for computational learning while predictive analytics is a “procedure that condenses large volumes of data into information that humans can understand and use.”

These are more algorithm based. They are able to predict what is best for your client or company based on the algorithm assigned to it. These, for a long time, have been considered one of the least bias ways to recruit because the algorithm does most of the choosing. Because machine learning and AI utilize pattern recognition and self-learning, they are considered an extension of predictive analytics but are used in a more sophisticated and modernized way.

Descriptive analytics came before predictive and used averages and counts to get the data it needed. As it evolved and turned into a predictive tool, it began using past events and history to predict what could happen in the future. Predictive analytics now uses three components to reach results:

Predictive analytics still relies on human interaction to get the job done. By using cause and change data, this tool is able to come up with an end result after a human tests the associations between the two.

It’s important to know the difference and be able to utilize each different tool between predictive analytics and ML and AI. But, it’s equally as important to know how they’re related. Both have very similar end goals and process because ML is a branch off of predictive analytics. They both also use data to reach a predictive outcome or candidate that works best for the client or organization. Knowing the differences and similarities between the two is the best way to make the technology work for you.

How do we apply these technologies to our recruiting process? 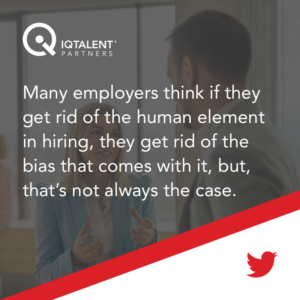 Algorithms. Algorithms are the key to making machine learning work in your organization and for your clients. They understand what you’re looking for in candidates and make predictions on candidate satisfaction and strive to improve for future projects. Although they are widely used, algorithms for machine learning and AI don’t work for every scenario and every position you’re looking to hire for.

Algorithms are harder to incorporate in roles with a lower global employment number. This is because there isn’t as much data which, in turn, makes learning difficult. This is where predictive analytics shows its worth.

Taking advantage of technology without the bias

This isn’t an easy feat. Although machine learning and AI are largely computer operated, humans still have to create the algorithms that go into the process. Many employers think if they get rid of the human element in hiring, they get rid of the bias that comes with it. But, in order to ensure you’re not incorporating unconscious bias, you need to check and double check that the algorithm created isn’t filtering people out based on characteristics like:

It takes knowledge, patience and expertise to combat the #bias that’s probably happening in your #recruiting tools. See what @IQTalent has to say about recruiting bias and what you can do about it:Click to Tweet

Once these are ironed out of the algorithm, you still have to deal with the battle of hiring the candidate the program says is a good fit for the position. This is slightly easier with machine learning and AI because it’s less hands-on from a human perspective. When using predictive analytics, one has to be careful to not lead the program away from a candidate who may be perfect for the job from the technology’s view, but less than perfect from a human perspective.

Recruiting technology is only as biased as humans make it. Granted, it’s not easy to get rid of the unconscious bias some people have. But, it can be even harder to write an algorithm that learns along the way. Once we separate ourselves from what we think is right and let technology do the talking, we can see the positive impact it has on candidates and future company culture.

Interested in what IQTalent Partners can do for your company culture and hiring initiatives? Come check us out!

TA Firm Announces a Diversity Focused Candidate Research SaaS
IQTalent Partners launches Diversify by IQTalent Xchange, a first-of-its-kind inclusive talent exchange platform focused on identifying diverse passive candidates.
Keep Reading
How You Can Save Time and Add Value Using On-Demand Recruiting
Recruiting and hiring are some of the most expensive tasks for a business to undertake. It takes an army to sort through endless resumes, contact potential candidates, ...
Keep Reading
Engagement Strategies to Source Stronger Candidates
This article on sourcing candidates with engagement strategies was originally published in February 2019. All relevant statistics and content have been updated as of ...
Keep Reading